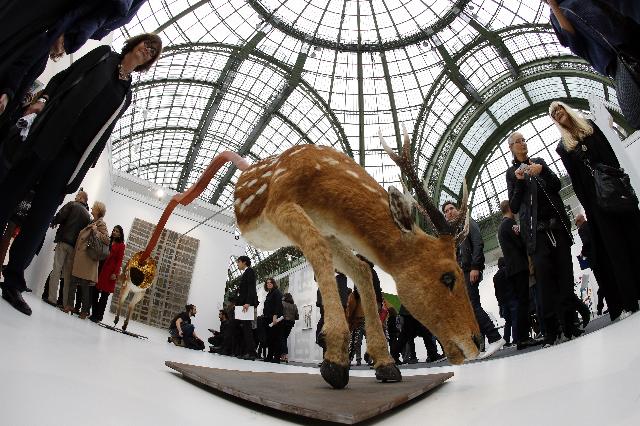 Visitors look at an artwork by Chinese-born Paris-based artist Huang Yong Ping with the title ‘l’arc de St Gilles 2015′ at the Grand Palais as part of the FIAC international contemporary art fair in Paris on October 21, 2015. AFP PHOTO / FRANCOIS GUILLOT RESTRICTED TO EDITORIAL USE, MANDATORY MENTION OF THE ARTIST UPON PUBLICATION, TO ILLUSTRATE THE EVENT AS SPECIFIED IN THE CAPTION (Photo credit should read FRANCOIS GUILLOT/AFP/Getty Images)

There is no place like Paris. Or at least not as many that can combine beautiful architecture with the romance and great (contemporary) art at the same time. The shimmering lights of the Tour Eiffel, the river Seine and its bridges adorning  Île de la Cité, all the charming and vibrant cafes populating the city: these are just some of the things that make Paris such a great cityscape.

When FIAC is happening, there is even more to see. Here a selection of the Top #10 artsy things to see and experience this week (and some beyond). #1  Tino Sehgal at Palais de Tokyo, Paris, October 12 – December 16, 2016
Palais de Tokyo presents this fall an exhibition conceived by the British born, Berlin-based artist Tino Sehgal (b. 1976). The second of a series of “carte blanche” shows – interventions by artists covering the entirety of the 13,000m² exhibition space of Palais de Tokyo – begun by Philippe Parreno in 2013. For this show, whose main material is human, in a metamorphosed Palais de Tokyo, Tino Sehgal is presenting his works alongside pieces by other artists he has chosen to invite: Daniel Buren, James Coleman, Félix González-Torres, Pierre Huyghe, Isabel Lewis and Philippe Parreno. The artist will transform the museum’s exhibition space into and area where his own “constructed situations” reside, displayed in conjunction with a selection of the artist’s major works and those of other artists Sehgal has invited.

#2  René Magritte, “La trahaison des images” at the Centre Pompidou, September 21, 2016 – January 23, 2017
“René Magritte: La trahaison des images” (the treachery of images) offers – according to the Centre Pompidou – a completely new approach to the work of the Belgian surrealist painter René Magritte. Featuring both well-known masterpieces and other less familiar works, all drawn from leading public and private collections, it offers a fresh look at one of the key figures of Modern art. The Centre Pompidou will showcase around 100 of the artist’s paintings, drawings, and documents in the latest of a series of monographic exhibitions devoted to key figures of 20th century art.

#3  Paris Internationale, October 19 – 23, 2016
Paris Internationale is a joint initiative from 5 emerging galleries, four of which are Parisian, and one located in Zurich: Crèvecoeur, High Art, Antoine Levi, Sultana and Gregor Staiger, as a collective attempt to develop an appropriate model for fostering new advanced initiatives in contemporary art. Functioning as a satellite fair to FIAC, Paris Internationale has been created by the young dealers as a collective attempt to launch a platform that is affordable for young and alternative galleries fostering new talents.  The fair is only in its second edition, but has already established itself as the cool hangout for spotting edgy, uprising artists. The fair will take place at 51 Avenue d’Iéna, a hôtel particulier built in 1897, most notably known as the Parisian residence and salon of prominent art collector Calouste Gulbenkian. For five days, the four story mansion, which spans over 3,000 m2, will host 61 participants including 54 galleries and 7 project spaces hailing from 21 countries. #4  Maurizio Cattelan, “Not Afraid of Love” at Monnaie de Paris, October 22, 2016 – January 8, 2017
If you’d know me, you’d also know my love for Cattelan. Metaphorically speaking, obviously!

So I’m excited to point out that Cattelan will be presenting his largest exhibition in Europe since the 2011 outing with “Not Afraid of Love”. Curated by Chiara Parisi, this exhibition is “deeply” inhabited by the artist. A selection of artworks, those ones whose images promise (ore threaten?) to “remain forever in our mind”, will be displayed in the 18th century salons of Monnaie de Paris.

#5  Marcel Duchamp, “Porte-Bouteilles” at Galerie Thaddaeus Ropac, October 20, 2016 – January 14, 2017
Since its foundation in 1983, Galerie Thaddaeus Ropac has specialized in international contemporary art representing around sixty artists including very established names, mid-career artists and emerging young talents as well as several renowned estates. If they would have a “Legendary” category, Duchamp would definitely belong to that! His emblematic Porte-bouteilles (Bottle Rack, 1959) is being shown in the gallery’s Marais space and sold by Thaddaeus Ropac, together with the Robert Rauschenberg Foundation. The exhibition coincides with the 100th anniversary of the term “readymade,” first used by the artist in a letter to his sister Suzanne in 1916. The sculpture was bought by Robert Rauschenberg for his personal collection after it was included in group show featuring works by the two artists. Hopefully the sculpture will go to a museum, for everyone’s enjoyment!

#6  Marcel Duchamp Prize at the Centre Pompidou, October 12, 2016 – January 30, 2017
Once again, Duchamp. This time though, with the prize that bears his name, i.e. The Marcel Duchamp Prize, one of the most prestigious contemporary art award in France and one of the most anticipated exhibitions of the FIAC week. This year’s shortlisted artists are Kader Attia, Yto Barrada, Ulla von Brandenburg, and Barthélémy Togua. The winner is announced during the fair, and the show at Paris’s Centre Pompidou provides a unique opportunity to view the work of these artists (before and after the winner is revealed).

#7   The Shchukin collection at the Fondation Louis Vuitton , October 22, 2016 – February 20, 2017
The collection of the Muscovite industrialist Sergei Shchukin, the visionary Russian collector of French modern art, will go on view at the Fondation Louis Vuitton in Paris. The collection constituted by Shchukin includes works by the most renowned impressionist, post-impressionist, and modernist masters like Monet, Cézanne, Gauguin, Renoir, Picasso and Van Gogh. #8   Tom Wesselmann, “A different kind of women” at Almine Rech Gallery, October 17 – December 21
Almine Rech is hosting the most significant exhibition of historical artworks by Tom Wesselmann, inspired by the artist’s 1970 exhibition at Sidney Janis Gallery in New York. Wesselmann’s ‘Bedroom Tit Box’, a key performative work from the Janis exhibition, will be restaged in Paris for the first time. The work will be installed alongside seminal examples of Wesselmann’s post-collage works, making the exhibition at Almine Rech the most significant presentation of the artist’s work in Paris since his 1995 retrospective at the Fondation Cartier, and groundbreaking 1967 exhibition at Ileana Sonnabend Gallery. The exhibition is organised in partnership and with the collaboration of the Estate of Tom Wesselmann.

#9   Olafur Eliasson at the Palace of Versailles, until October 30, 2016
Olafur Eliasson is the contemporary artist invited to Versailles in summer 2016. Born in 1967 in Denmark to Icelandic parents, his work investigates perception, movement, embodied experience, and feelings of self. If you haven’t had the chance to visit Versailles already, this is the last perfect chance to see both the magnificent palace and to discover one of the most influential artists of our time.

#10   Outsider Art Fair, October 20 – October 23, 2016
The Outsider Art Fair, now in its 4th edition in the French capital, is the world’s foremost annual show of outsider art and art brut. Responding to the ever-widening audience for self-taught art within the broader art world, the OAF’s Paris edition is timed to coincide with FIAC, Paris’s high-profile contemporary fair. This year the OAF Paris will present 38 galleries, of which 15 are new to the fair.

Have fun and don’t forget to join me on

to follow all the stories from and around FIAC!